Area D has a population of just 836 – and this is the total of all the far flung disparate communities of area D including , Porteau Cove, Furry Creek, Britannia Beach, Upper Squamish Valley, Upper Cheakamus, (aka Tunnel Station), Ring Creek, Pinecrest Estates and Black Tusk Village. Basically, this is the catch basin stretching from Lions Bay to Pemberton- not including Squamish and Whistler. Each of these areas is unique unto itself, and we share few of the same concerns- the SLRD board and staff do their best to represent us, but it’s a difficult endeavour. It is therefore important to stay informed and aware of changes that will affect us here in the USV, and to lobby together to maintain control of our community and our quality of life. 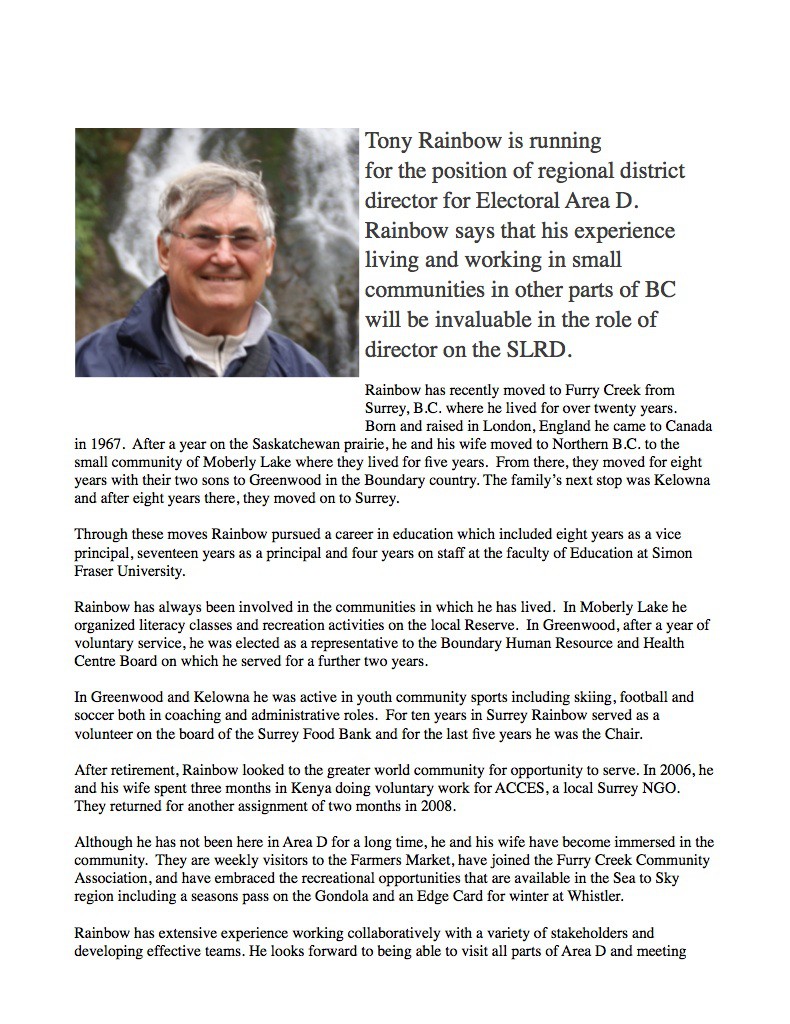 The Agricultural Land Reserve (ALR) is a provincial zone in which agriculture is recognized as the priority use. Farming is encouraged and non-agricultural uses are restricted. In lieu of local zoning, this was recognised as the main governing body for Land use here in the valley. Recently, SLRD have introduced a number of compatible local zoning bylaws for the area- this continues to be a work in progress.

For more information on permitted and compatible uses, restrictions and legislation, etc please visit the website at http://www.alc.gov.bc.ca/alc.

The Agricultural Land Reserve (ALR) is a collection of agricultural land in the Canadian province of British Columbia in which agriculture is recognized as the priority. In total, the ALR covers approximately 47,000 square kilometres (18,000 sq mi) and includes private and public lands that may be farmed, forested or are vacant. Some ALR blocks cover thousands of hectares while others are small pockets of only a few hectares. The reserve is administered by the Agricultural Land Commission (ALC), consisting of a chair and six vice-chairs appointed by the Lieutenant Governor-in-Council of British Columbia (cabinet) and twelve regular commissioners appointed by the provincial Minister of Agriculture.

The ALR was established by the British Columbia New Democratic Party government of Dave Barrett in 1973, when it was considered to be the most progressive legislation of its kind in North America. It was intended to permanently protect valuable agricultural land that has among the most fertile soil in the country from being lost. Despite having been in existence for over 40 years, however, the ALR continues to be threatened by urbanization and the land development industry.

Since its inception, critics of ALR policy claimed that ALR restrictions prevented profit-taking by land owners — especially in British Columbia's rapidly growing Lower Mainland region — where in the early twenty-first century land prices are among the highest in North America. The claim is also made that owners of land in the ALR are not sufficiently compensated for their property, and that the ALR constitutes unreasonable interference in private property rights. However, media reports indicate that the ALR has widespread popularity among British Columbia voters.

Defenders of ALR policy respond that the province has little arable land, especially of such productivity as exists on the Fraser River delta around Vancouver, and that the ALR protects British Columbia's important agriculture sector. They also suggest that a large part of the Lower Mainland's development pressure comes from the lack of a unified land use and transportation plan for the Greater Vancouver Regional District, and the failure of municipalities to replace sprawl with density. Finally, they claim that the ALR is a reasonable extension of the government's right to zone land for various uses. Defenders of the ALR have been distressed in recent years at what they see as the weakening of the policy, by the designation of golf courses as "agricultural land" and the removal of ALR-protected lands for residential, commercial, and industrial development. This type of cumulative, piecemeal erosion of the ALR landbase is logically seen as being incompatible with the necessity of feeding a burgeoning population whose ongoing growth is largely fueled by immigration.