Living on a Floodplain

The flood regime history is mixed, with sustained high water during the snowmelt freshet from May through July, and day to week-long flood events generated by rainstorms or rain-on-snow events that occur at any time of year but principally from October to December. There have been instances of flash flooding- usually these occur with bouts of heavy rain after a long dry spell when the ground doesn’t readily absorb water. This was the case on Aug 29, 1991 where 170mm of rain fell in 2 days onto parched dry land resulting in a major flood peak level of 2460 m³/s. This was similar to Oct 2003, when 250 mm fell in 3 days after another very dry summer. Annual instantaneous flood discharges vary from 800-3150 m³/s.

As well, the danger of landslide dam outburst floods affecting the area is under appreciated. At Mount Cayley there is a long History of landslides blocking Squamish River, 1/500 per annum averaged over 8000 years. There are extensive backwater flood sediments between Mud Creek (34 Mile) and Elaho junction (37 Mile). Certainly some of those would have outburst in the past and evidence of extremely muddy run-off into the Squamish river can be seen often during periods of heavy rain. Mount Cayley is a volcanic centre located 25 km upstream within the Squamish River watershed. Landslides from Mount Cayley have caused temporary blockages of the Squamish River, at least 7-8 times in prehistoric period and twice in the last 100 years . Such blockages cause interruptions to the flow of Squamish River, and the landslide barriers have the potential to fail rapidly leading to outburst floods affecting downstream reaches, as happened in 2010 in the Lillooet River headwaters following the collapse of Mount Meager in Capricorn Creek.

The whole valley floods...Click on the images to view full size. 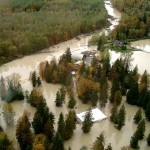 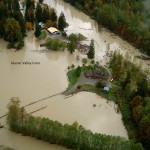 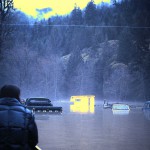 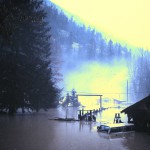 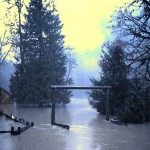 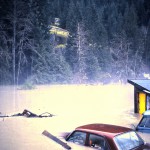 1What time of year does the river usually flood?

It can flood at any time, but mostly in the fall, when fresh snowpack is brought down by warm rain systems. The most recent five big floods occurred on Oct 17 (03), Aug 29 (91), Oct 7 (86), Oct 31 (81), Dec 24 (80).
The spring run-off is not as drastic as the Fraser, which experiences regular high flood levels in the spring due to the cumulative effects of melt in a much larger watershed.

2What is the ‘Flood Construction Elevation’ and how is that determined?

Floodplain mapping was published by Ministry of Environment in 1983. The predicted 200-year and 20-year return flood levels for any particular area should be compared with ground elevation ascertained from geodetic elevation markers. There are a number of these markers in the valley; it is prudent to know what your property elevation is (and the FCL). Qualified professional surveyors or geoscience engineers can provide excellent detailed assessment reports. Pierre Friele of Cordilleran Geoscience Terrain specialists has provided much of the information for this page- he is an excellent resource.

Or you can use the ‘old school’ method- look at the largest tree on your property and gently peel away the moss until you find the silt line from the highest water level- it may be a shock!

3Why have past floods been different in how they affect different areas - doesn’t the water find one level?

There is quite a variation in surface elevation throughout the floodplain, between the base of an abandoned meander scroll to the crest of tallest over bank could be 5-6 m in some places. Local variations are typically 1-3 m. The surface is undulating to channeled and secondary channels will be active during floods. Therefore, over bank flooding may have complex hydraulics with large difference in elevation and velocity over short distances. Local scour, at a log drop or foundation corner, could be substantial (1-2 m). Features such as roads and ditches can cause havoc by capturing and directing flow. If the Squamish breaches into Red Creek, that low trench channels water through the north side of the valley causing very severe flooding, as it did in 84 and 91. In 2003, there was much less effect on the north side of the valley, even though the flood level was higher. This is due partially to some bank re-enforcement work done around the hydro towers at mile 22. However, that bank was not constructed as a dyke, and could easily fail in the event of severe high water.

4What are some important things to be aware of in case of flooding?

If you have flood water on your property, chances are that your well will be contaminated. Make sure you have adequate supplies of drinking water to last until you can pump out and sterilise your well

If the water gets high enough to cause concern- its probably already too late to leave- the valley road has some major low spots that make it impassable and very unsafe to drive through. In the past, there have incidents where cars floated away while driving- carried into a ditch or into the current. Many folks are extremely lucky not to have drowned- one woman “swam” all the way down the river finally making it ashore at Cheekeye. A truck’s engine flooded and stalled in the reserve- the occupants spent the night on the roof before being rescued the next day. Do not try to drive during times of flooding.

Firewood floats! Although the flood water usually recedes in a relatively short time, the damage can be extensive. Even if it doesn’t touch your house, the silt and debris left behind makes a huge mess and if all your firewood was piled on grade, you may not have any left. Many cars and vehicles, including tractors, recreational vehicles, lawnmowers have been lost to water/silt damage when parked on low ground- plan accordingly and be aware of what you leave vulnerable. Do not build permanent structures without knowing the flood level on your lot!

Know your neighbours- especially the ones living on high ground!